The Zentralmagazin Naturwissenschaftlicher Sammlungen (ZNS) is a central institute of the Martin Luther University of Halle-Wittenberg. As a national competence centre for biodiversity, the institute aims to create an innovative link between its collection, research activities and exhibitions. The Eocene fossils discovered in the Geiseltal in Saxony-Anhalt are one of the highlights of the institute’s extraordinary natural history collection. The 50-million-year-old specimens form a cohesive collection unlike any in the world, which has proven significant for studying and understanding life at that time. Because the Eocene epoch was warmer than our present climate, the fossilized specimens – such as those of crocodiles and small prehistoric horses – provide important data for climate researchers today. Special expertise is required to conduct environmental research based on selected fossils with regard to evolutionary events. Young university graduates from North America, Asia and especially China and Australia have made remarkable strides in this area of paleontology using the latest methods. In collaboration with the American fellow Alexander K. Hastings, the museum hoped to strengthen paleontological research, as well as focus on new aspects in presenting the university collection.

The Geisel Valley 45 million years ago: Whom did the tiny ancestral horses fear? What did they eat? Why was the man-sized bird Gastornis so big? Did even crocodiles hunt on land? These questions are answered through recent research featured in a special exhibition on the rich biota of the Geisel Valley and the dawn age - the Eocene, with original fossils, digital media and skeletal reconstructions. Germany was once home to numerous species of crocodile, a group with only few European relatives. Over the course of thousands of years, they evolved into various subspecies and eventually ended up as fossils. In the Geiseltal valley in Saxony-Anhalt, scientists discovered numerous fossils including those of four crocodile species and a giant bird.
The reorientation of the Geiseltal Museum offered curators the chance to present the impressive diversity of primeval species in a new form. The spectacular presentation incorporated the latest research findings, computer animated elements and interactive media. Visitors to the exhibition could virtually travel back in time to experience the world in which the dinosaurs and other extinct species lived. The media-based animations allowed the visitors to gain a “first-hand” impression of the dynamics of life some 45 million years ago, making it easier to visualise primeval living environments and the processes of evolution. The project was designed to appeal to different age groups; smaller children, for example, were presented with information that corresponds to their view of the world. The exhibition was developed in cooperation with the German Academy of Sciences Leopoldina in Halle/Saale and was targeted at an international audience, researchers and visitors from the region.A temporary exhibition on Eocene fossils from Geiseltal by the Center for Natural Science Collections of Martin-Luther-University Halle-Wittenberg. Supported by: National Academy of Sciences Leopoldina

Exhibition: Monday–Friday, 10 am – 18 pm and by appointment. 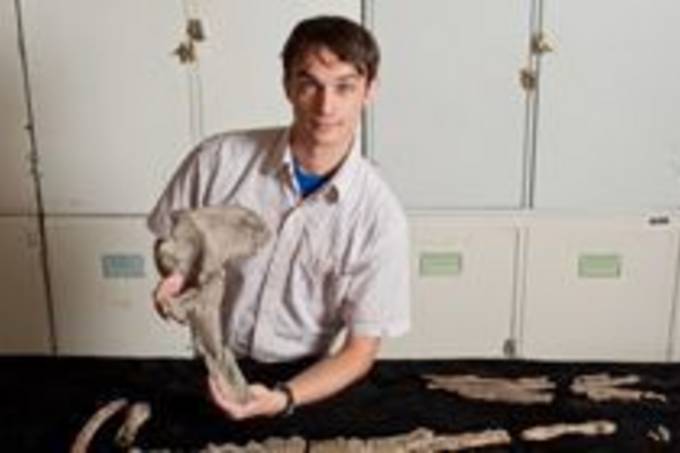 Alexander K. Hastings obtained his Bachelors of Science degree from Penn State University in 2005, then went on to get his PhD at the University of Florida, August 2012. His dissertation research was on the fossil crocodyliforms of the Cerrejón coal mine in north-eastern Colombia. During his research, he played a part in the discovery of the largest snake ever recorded, Titanoboa. He continued his career as a visiting instructor at Georgia Southern University and holds the current PostDoc position in the Fellowship Programm from May 2013 onwards. Alexander K. Hastings published in high ranking journals, such as Nature.