The label “Made in Bangladesh” has become synonymous with exploitation and brutality since the recent accidents in the textile factories in Bangladesh focused international attention to the catastrophic working conditions there. In this dance project, choreographer Helena Waldmann examined the notorious sweatshops in the textile industry and the presumably legitimate “sweatshop” of the dance studio – and discovered that they have more in common than our cultural establishment would care to believe. Dancers and seamstresses alike lead precarious lives in terms of pay, safety, health, employment contracts and job security, and they are constantly in danger of losing their job to younger, more flexible competitors. The result is exhaustion on one hand and an increase in productivity on the other.
Yet Waldmann’s project wasn’t merely an intellectual play on obvious parallels; she took it one step further. In the winter and spring of 2013/2014, she embarked on a documentary project which took her to Dhaka. Together with the Kathak expert Vikram Iyengar from Calcutta, she developed the new production with 12 experienced Kathak dancers on location. In addition to overseeing the choreography, it was important to Waldmann to explore the thematic background of the production. Supported by Nazma Akter, perhaps the most prominent international activist against exploitation in the textile industry, the production team organised several meetings between the performers and workers, and even arranged a visit to their actual workplace in a factory operated by the Rishal Group of Industries. The results of the research work have been incorporated into the multimedia production in the form of video clips and audio collages. 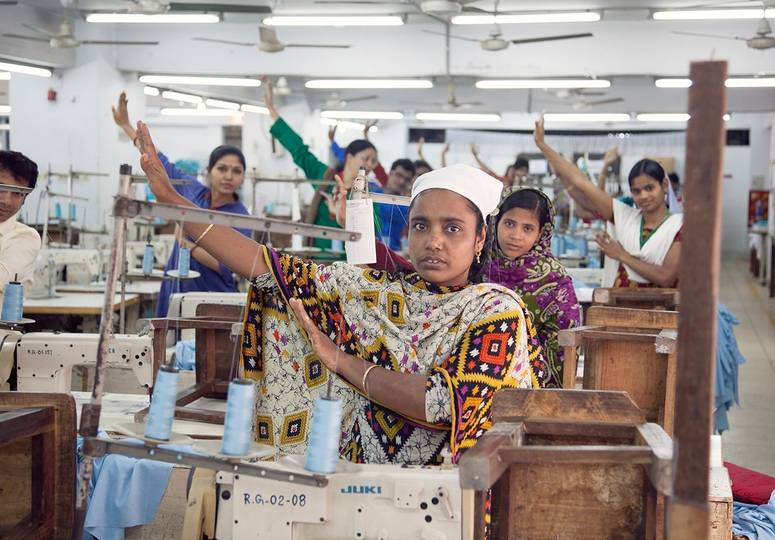