On the occasion of the 100th anniversary of the constitutive National Assembly in Weimar in 1919, this festival examined the enormous surge of creativity driven by Yiddish culture during the years of the Weimar Republic. “Yiddishland” was the original name for the region of central Europe which had been home to a large Yiddish speaking community. In the meantime, the epithet has also come to signify an imagined transnational area.

Since the medieval times, the Yiddish sociolect was already becoming an important language of culture, literature and politics. This development reached its zenith during the years of the Weimar Republic. And this is where the project in Weimar began. The festival comprised five modules which addressed various aspects of Yiddish culture in the Weimar Republic. Based on unpublished ethnographical recordings of the 20th century, internationally renowned artists such as Amit Weisberger and Josh Dolgin provided impulses for new 21st-century Yiddish music. For the module “New Yiddish music theatre” the composer and director Alan Bern was inspired by the work of the writer Itzik Manger and composed a musical score which the Jewish Cultural Federation was no longer able to complete in 1936. In the project “Cross-Century Encounters 1919 – 2019” two contemporary artists arranged a meeting with their predecessors of the 20th century. Jury Vedenyapin from Montreal explored the “berliner goles” (Berlin diaspora) and Michael Wex from Toronto investigated Yiddish "kleynkunst" (Yiddish small works of art) in Warsaw. In the module “Song Cycles”, works by relatively unknown Yiddish poets served as the basis for two new song cycles composed by Polina Sheperd, Efim Chorny, Daniel Kahn, and the most prominent composer of new Yiddish songs in his generation, Josh Waletzky.

A lecture series on Yiddish and Jewish culture in the Weimar Republic has introduced the public to current academic debates and has explained the historical contexts that served as the backdrop and foil for the new artistic works. 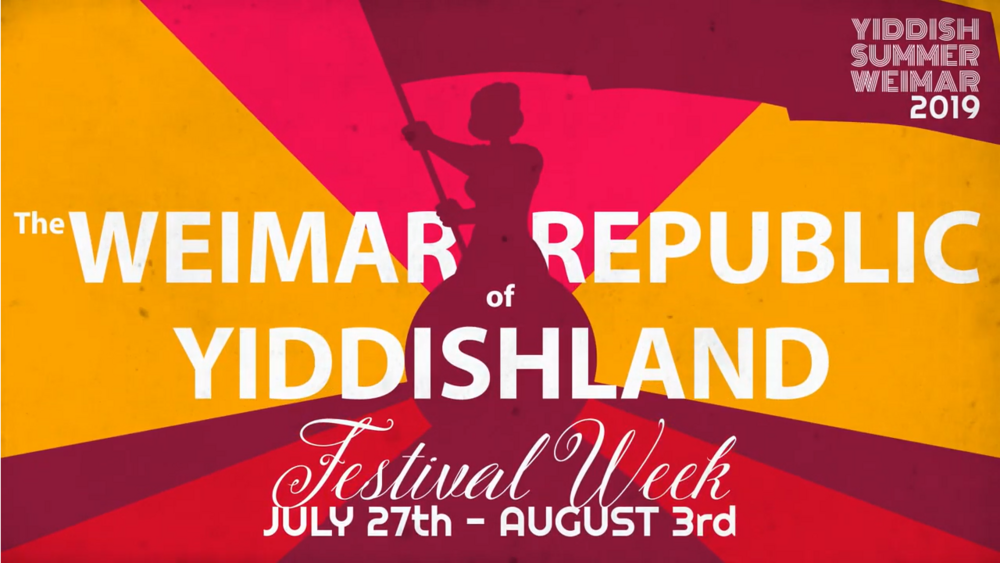 The Weimar Republic of Yiddishland