Show the full version of this element's decorative background image.
Transformation and Future

The German Federal Cultural Foundation turned 20 years old on 21 March 2022. As one of Europe’s largest publicly funded cultural foundations, it has provided crucial funding to some 4,000 innovative programmes and projects of contemporary culture since 2002. In addition, the Foundation has initiated countless programmes, pilot projects and special funds to promote a future-oriented structural transformation at cultural institutions.

History and Anniversary of the Foundation

The German Federal Cultural Foundation was founded on 21 March 2002 at the initiative of the then Federal Minister of Culture Julian Nida-Rümelin. The Foundation enriched the profile of the federal government’s cultural promotion activities with an extraordinarily rich cultural landscape, maintained and cultivated under the authority of the federal states. At the time, the new states of eastern Germany were making remarkable contributions to culture but had received little recognition for their efforts in a reunified Germany. The decision to make Halle an der Saale in Saxony-Anhalt the headquarters of the Federal Cultural Foundation symbolised the importance of eastern Germany and served as the cornerstone for supraregional cultural collaboration. Hortensia Völckers was appointed the artistic director, Alexander Farenholtz, the administrative director, and together constituted the executive committee of the new foundation.

The question was: What kind of themes or programmes were best suited for development at the supraregional level? Openness was the order of the day from the start and became the guiding principle in the early years. The Foundation deferred to the expertise and experience of artists in eastern and western Germany and abroad, tapped the potential of cultural institutions and independent scenes, and drew inspiration from their needs, wishes and utopias. In this way, new collaborations began forming across state boundaries and ideas were developed in a community-oriented manner. Using the debates and trends in culture and society as a starting point, the Foundation drafted a funding philosophy which would ultimately prove effective by having a tangible qualitative and quantitative impact on the cultural sector.

The decision to locate in Halle an der Saale was a stroke of luck from the start. Especially in the beginning, the Foundation had to engage in dialogue with many different people from different German states, to learn from them, listen to them, and ask questions instead of prescribing answers and reverting to conventional solutions. This encouraged our team at the Foundation and ultimately influenced how we worked: to learn what is important to a diverse array of cultural participants nationwide, what they are committed to achieving, what they need support with, what they want to change, what obstacles stand in their way, and how they imagine the development of the arts in the future. The trust that colleagues and artists have placed in us is invaluable. Over the course of 20 years, we have thus been able to collect a massive trove of knowledge about the German cultural landscape unlike any other.

It would have otherwise been all but impossible to develop and carry out multi-year programmes on top of the responsibility to support application-based projects through General Project Funding. Our programmes and special funds have staked the future of our cultural landscape and set milestones for other cultural institutions thanks to their model character on such issues as climate (“Programme Zero”), diversity (“360° Fund”), digitalisation (“Digital Fund”) and international partnerships (“TURN Fund”, “International Museum Fellowship Programme”). Some programmes only had an impact on society or received (cultural) political recognition after their conclusion. In hindsight, however, they quite often played a pioneering role in certain thematic areas, such as “Project Migration” from 2004 or the climate project “Art of Survival” from 2012. Other programmes delivered surprisingly fast and uncomplicated solutions for pressing problems, for example, the programmes to support cultural artists in pandemic times (“Cultural Summer 2021”, “Reload” and “dive in”).

That the Federal Cultural Foundation was honoured in the current coalition agreement as a “driver of innovation” underscores the belief that our funding measures have served as a kind of “signal tower” for the past two decades. Our role has been to guide cultural change, cultural renewal and cultural transformation, communicating the signals we receive from the art scenes to our (federal) policymakers. 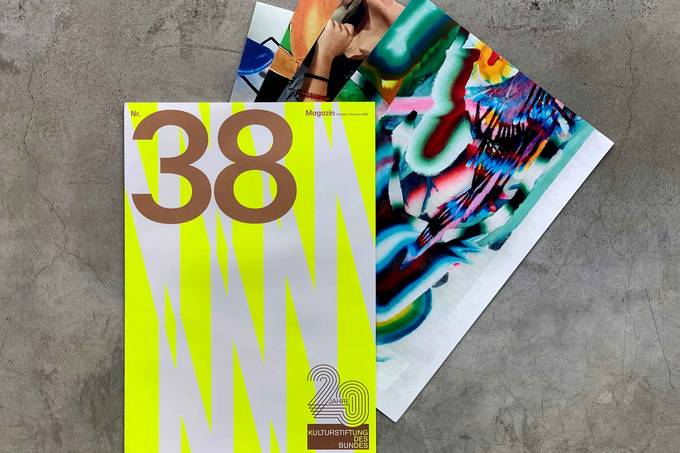 Magazine #38, published in spring 2022, celebrates the twentieth anniversary of the German Federal Cultural Foundation: It is our way of saying thank you to everyone who has accompanied us during the past 20 years.