Over the past 20 years the theatre RambaZamba has produced works for the stage which offer individuals with disabilities the chance to develop their artistic potential in a variety of ways. The theatre has received numerous awards for its productions and is recognised as one of the most influential and best-known integrative theatres in Germany.
Their new piece is based on Bertolt Brecht’s parable “The Good Person of Szechuan”. In this project, the ensemble of RambaZamba had teamed up with prominent theatre artists, such as actresses Angela Winkler and Eva Mattes, and the Hamburg theatre music composer Ernst Bechert. The play artistically explores the heated debate about inclusion and the right of all people who deviate from the norm to take charge of their own lives. Consequently, the tale of the “Good Person of Szechuan” as told by RambaZamba assumes a topical and controversial twist: the main character of Brecht’s parable, Shen Tee, suffers from Down syndrome. On account of her condition, the gods cannot bring themselves to judge her as being “good”. In addition to Brecht’s inquiry as to whether it’s possible to be a “good person” when fettered by poverty and oppression, this piece assesses our criteria of evaluation when applied to individuals with intellectual impairments. Guest performances took place in Lyon and at the Sichtwechsel Festival in Linz following its premiere in Berlin. 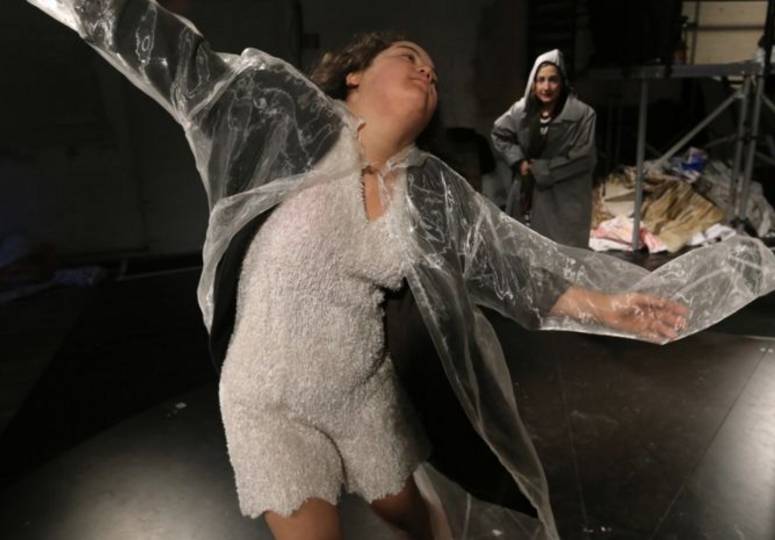